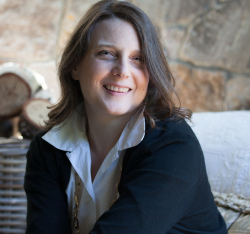 I was born to an engineer and a teacher in 1965 California, the oldest child of three in a comfortable, middle-class family.

I tested above average, made friends easily, but had a great love of reading and writing, often solitary pursuits.

When I finished high school, I went on to college.

Eventually, I got a B.A. degree in Radio, TV and Film but because of my extra-curricular involvement with the Theater Arts department I was pressed into service, acting in many of my classmates' student films.

Once I was out of college a few years, working as a waitress (yes, cliché), I started noticing brief instances of buzzing in my head just before I'd temporarily lose my ability to carry items or write down orders.

It would only last a few seconds, and the buzz would forewarn me, so I was able to mask my lapses with witty repartee, but it was happening several times an hour. So I began to seek out the cause.

Recognizing this buzzing as some sort of paroxysm, one of the doctors prescribed an anti-seizure medicine, which I only took for a few days.  (I can't remember why I stopped, but I do remember that the episodes had suddenly ended prior to my commencement of the drug.)

What the doctor had not told me was that he was required to report the prescription to the Department of Motor Vehicles, who suspended my driver's license for a year -- six months for being on the medication, then another six months for being off of it, presumably to ensure the absence of seizures.

I Rebel Then Go Back To School

A year later, when I got my license back, I bought a motorcycle and learned to ride, eventually getting licensed for that as well.  By this time I had been given a probable diagnosis of M.S. (editor’s note: unbelievably, still done today in 2019 as there is no definitive diagnostic test!)

I reasoned that since I had been wanting to try it for awhile, and since I could lose my ability to do so due to the disease at any time, I should not put it off any longer.  Oh, the drama!

But in another few years I still showed no signs of disability, and I became bored with it.  I sold the motorcycle and bought a car.

In the meantime, I had discovered the career of librarianship. I attempted graduate school twice, the second time successfully, and graduated with a master's degree in Library and Information Science in 1999.

But in my last semester, I lost the ability to write by hand.  This was problematic for note-taking in class.  I ended up bringing a tape recorder to class then typing out notes on the computer when I got home.

I also could no longer write in a journal.  I tried to keep one on the computer but just never could replicate the carefree process of a written journal; the desire to correct spelling and edit the content into a more cohesive narrative was too tempting.

Bought A House And Started A Blog

So as a single woman, I bought a house.  A shack, really.  Near the ocean, like I always wanted.

Then, in 2007, I started writing this blog.  It's an alternative to keeping a journal, an accommodation if you will.  It's a way for me to share how it feels to be living inside this body and how to find creative alternatives when you begin to lose abilities.

And because I moved at that time to this place, I met the man who would become my husband. Who used to work as a contractor but is now…er…retired.

But using all that exquisite know-how to pretty up my house, which is now our house.

The moral of the story is this: things happen for a reason.

I'm hoping that my experiences can be useful to others.  And as I remind others with M.S., "After all, at least we are experts at having this disease."