Or lessons I learned from the outage. 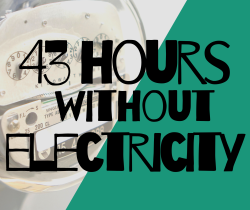 There were a few emails the day before, warning us that they would need to shut off electricity in advance of the powerful wind as a precaution. Given the recent, disastrous fires, it is easy to agree with the reasoning.
But really? Is this the best PG&E HQ could come up with in the two years since Paradise? I think this is a distressing lack of imagination! Even my cousin in Washington said “Somehow many other countries have figured out how to run the power lines underground. Perhaps they could draw us a little picture.”
OK, I do believe in climate change, both natural and man-made, but I also
living in Hayward and suffered through the Oakland Hills firestorm in 1991, so this is hardly a recent problem. If burying the lines was so expensive back then, we could’ve at least started saving then. Maybe had a bake sale? Just sayin’
The outage
We lost power on Saturday night at 8 PM and it stayed off until Monday afternoon at 3 PM. 43 hours. Not anything like what other people have gone through, but disturbing nonetheless.
With advance notice I was able to put fresh batteries in my flashlight and charge up my iPad and cell phone. In present day society, being able to text and listen to podcasts while the power is out is not a hardship. I was able to ration my battery accordingly.
Like camping
I am heat sensitive like many MSers but I do not use an Air conditioner at this time. Luckily if  I needed an air conditioner I could be driven to a local cooling station, for example. Usually in a community in crisis there are places that are running on a generator.
Another friend asked do you have a plan if you have to get out? Answer yes. In fact my husband keeps the gas tank in the truck above the half full level at all times, and has it already stocked with emergency supplies. So at a moments notice (well for me that’s more like 10 minutes!) we just have to get ourselves out the door and into the truck.
Debrief
Ultimately this could have been way worse. Clearly my exit plans rely on rely on friends and family to help me out of the house, or to drive me somewhere. I‘ll continue to mull exit options for the future, but I guess you never know what you don’t know until after the event.
So for the next power outage should get: hand crank radio, solar powered or battery-operated cell phone/iPad charger, maybe some cans of cold coffee and a battery operated fan?
Which makes me think of preparing for camping or a zombie apocalypse (digression: would zombies be a danger to me since I notice that mosquitos no longer will bite me now that I’m taking a DMT, probably my blood tastes bad to them, although that is anecdotal so could be applicable just to me...)

What I’ve learned this week